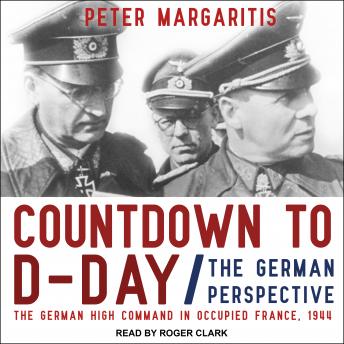 Countdown to D-Day: The German Perspective

In December 1943, with the rising realization that the Allies are planning to invade Fortress Europe, Field Marshal Erwin Rommel is assigned the title of General Inspector for the Atlantic Wall. His mission is to assess their readiness.

His superior, theater commander, crusty old Field Marshal Gerd von Rundstedt, who had led the Reich to victory in the early years of the war, is now fed up with the whole Nazi regime. He lives comfortably in a plush villa in a quiet Paris suburb, waiting for the inevitable Allied invasion that will bring about their final defeat.

General der Artillerie Erich Marcks, badly injured in Russia, is the corps commander on the ground in Normandy, trying to build up the coastal defenses with woefully inadequate supplies and a shortage of men to fulfill Rommel's demands. Marcks is convinced that the Allies will land in his sector, but no one higher up the chain of command seems interested in what he thinks.

Countdown to D-Day takes a detailed day-to-day journal approach, tracing the daily activities and machinations of the German High Command as they try to prepare for the Allied invasion.

Countdown to D-Day: The German Perspective