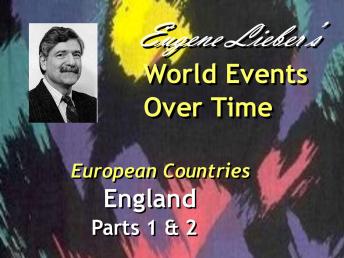 Formative Periods. Tribal England. Life of bare existence. Roman invasion. Brutal treatment of the native population. "They make a desert and call it peace." The Roman Empire declines. Series of conquests of England by the Vikings and Anglo-Saxons.
William the Conqueror wins the Battle of Hastings, 1056 A.D. Norman control lasts for centuries through dynastic rule, but with incessant fighting. (3.55.00) = War of the Roses. in the 1400s between Richard III's House of York and the Henry VII's House of Lancaster. Henry VII wins, begins the Tudor Dynasty. Question of whether Richard III is the villain Shakespeare makes him out to be (6.37.00) = Absolute divine right monarchy of Henry VIII, a powerful tool for control over peasants. He has an immense ego and size, acquires 6 wives. (8.56.00) = Protestant Reformation. The Pope rejects divorce and annulment, threatening the status of Henry VIII's heir. He founds the Anglican Church, keeps most of the Catholic doctrine, except adds the right to divorce, with himself, the King of England, as the chief authority. His friend, Thomas Moore, opposes his break with the Catholic Church, is executed. Henry VIII is succeeded by Mary, daughter of his first wife, who tries to restore the Catholic Church. (17.51.00) = Elizabeth I, Henry VIII's first wife's 2nd daughter, becomes Queen of England, rules from 1558 until her death in 1603. She resists the pressure to produce an heir, maintains her independent power, entrenches the supremacy of the Anglican Church. After plotting against Elizabeth I, Mary Queen of Scots is executed. England defeats the Spanish armada attempting an invasion, making England a major world power and naval power. (31.35.00) = Emergence of Capitalism. The emphasis on foreign trade for acquisition of wealth makes England more powerful than Spain which emphasizes storage of gold. Elizabeth's capability against the gender bias of others. (33.03.00) = The outpouring of culture. Shakespeare's plays which follow the political lives of the Tudors. (34.31.00) = The Stewart Dynasty lasts from 1600 to1900. Scotland is still independent. King James I is invited to rule after Elizabeth's death in 1603. England is still medieval. The aristocratic class resists capitalism, holding on to the old, the king on to absolutism. The English translation of the bible is called the King James Bible. James I is succeeded in 1625 by Charles 1 who is not very bright but is an absolutist. The Catholic versus Protestant conflict continues. (37.47.00) = Growth of capitalism threatens the aristocracy and absolutism which resist it as a threat. Parliament is centuries old, since the 13th century, is not democratic. has no written laws, only precedents. Although it is a rubber stamp for the king, he still has to go through it. Capitalist voices are raised in Parliament (41.31.00) = Puritanism is the English form of Calvinism. They believe in a one-on-one relationship with God, have simplified ceremonies and church structures. Puritans clash with Anglicans. Puritans are capitalists and promote modernism. The alliance of Parliament, Puritans and capitalists. (44.30.00) = Parliament becomes independent. King Charles I agrees to let Parliament become an independent power in exchange for its approval of the tax money he needs. In 1642, for the first time, it passes a law with no precedent. (50.36.00) = English Civil War begins in 1642. The aristocracy and the king against the Parliament, Puritans, and capitalists. Oliver Cromwell mobilizes the peasants and middle class with promises of more political and economic equality. The king loses in 1649, is captured and executed. The civil war begins in 1642. (52.00.00) = Oliver Cromwell as ruler. Promises are reneged. The Irish uprising is put down ruthlessly. (53.30.00) = Restoration period. Cromwell dies in 1668 and is succeed by his son, Richard, who restores the English monarchy with Charles II, the son of Charles I, as king. The political system is absolute divine right monarchy, but also capitalism with Parliamentary power. The king is seen as a force for stability in the minds of the peasants. Libertine attitudes thrive. (59.21.00) = The Glorious Revolution of 1688. Charles II is succeeded by his brother, James II, in 1685, who makes the mistake of announcing he will raise his son, the heir, as Catholic. The revolution throws him out of the country. John Locke writes that if a sovereign breaks the contract theory of government between the sovereign and those ruled, then citizens have a right to overthrow him. Thomas Jefferson uses this same argument in the American Revolution.