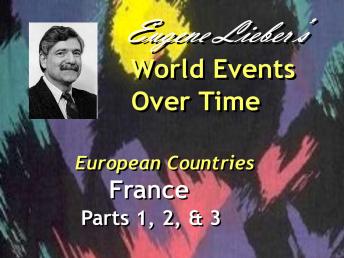 The Ancient World. Ancient Gaul. The various tribes of ancient Gaul and its conquest by Rome, becoming one of Rome's provinces. Rome declines and falls in 426 AD. (3.33.00) = Middle Ages: Feudalism based on pyramidal structure of political, economic, and military obligation, with the king at the top. Family rule through the noble class which is 5% of the population. The Bourbon Dynasty is in power until the French Revolution. Manorialism. Serfs work the arable land, pay 1/3 of the crop to the landlord, 1/10th to the Church. . (8.42.00) = The Arab Empire conquers Eastern and Southern Europe. The stagnation of Western Europe under feudalism. Moors and Jews are driven out in 1492 after the decline of the Arab Empire. (10.59.00) = Bubonic plague kills 23 million, 1/3 of Europe's population, in 2 years, decimating the serfs. (12.36.00) = Beginning of the modern world. Some serfs escape to the cities, join the guild system, become free after escaping 1 year + 1 day. Capitalist Marco Polo brings unknown goods from the Far East by caravan for profit. (16.20.00) = Reformation of the 1600s. Martin Luther, a German, and John Calvin, a Swiss, form Protestant movement. (18.59.00) = The Bourbon Dynasty is an absolute divine right monarchy, but Catholicism is still dominant. (20.40.00) = The 18th Century. Henry IV,.a Protestant ruler, shows the importance of the business class, the bourgeoisie. The rule of Louis XIV starts at age 14. He is capable, intelligent. France, adding land through wars, becomes the most powerful country in Europe through the 1600s. The cost of the 30-years religious wars between the Catholics and Protestants is paid by the serfs who fail to rebel (28.13.00) = The Versailles Palace is built sparing no expense and costing 2 billion 18th century dollars, paid for by the peasants. After Louis XIV's death, Louis XV rules for 50 years until the1770s. (32.56.00) = The Enlightenment. A new way of looking at the world through the rationality of science and education. A new religious tolerance toward Jews. Deism is a challenge to the Catholic Church. Less restrictions against trade. Legal changes protecting individual rights.

The 18th Century (continued). (French Revolution of 1789. The 2 crises of debt and food shortage. The debt result largely from the substantial aid France extends to the American Revolution. A session of the Estates General, composed of the clergy, nobility, and the commoners (Sans-Culottes) 1s convened. The bourgeoisie form the National Assembly to recreate France with a constitutional monarchy. The Declaration of Rights of Man and Citizens is rejected by the King Louis XVI. Spontaneous uprisings by the peasants. Many nobles flee and peasants claim land. (10.13.00)= Peasant uprising. First, Moderate Phase from 1789-1791. Bourgeoisie see capitalism as the economic future of France. They use the legislature to seize political power. Europe's nobility is fearful these ideas will spread, mobilize armies to attack France. (11.24.00) = Second, Radical Phase. A reign of terror from 1791-1794. France is attacked by European armies. The French revolutionary army fights brilliantly. A reign of terror by the Jacobins under Robespierre lasts 14 months. 17,000 are killed as revenge against nobles, including the king and queen. A faction of the Sans-Culottes demand abolition of religion. This is rejected by the Jacobins and Robespierre. This small faction takes power and in days executes Jacobin leaders including Robespierre. (20.31.00) = Third, Moderate Phase. The bourgeoisie win and the Jacobins (the peasants) lose. Yet Europe continues war against France, making the revolutionary army all the more significant. (22.31.00) = The 19th Century. The Napoleonic Era. . Napoleon seizes power in1799. He identifies with the bourgeois gains of the French Revolution, shifts to secular in social institutions. The Napoleonic Code of Law, a major achievement. Napoleon wins significant military victories, giving France control of Europe. (33.43.00) = Russia. His invasion of Russia is a disaster and his army is all but wiped out. He raises a new army, but inexperienced, it is defeated by coalition forces. (36.44.00) = Waterloo. He is captured, escapes from Corsica, builds a new army, loses his last battle at Waterloo, and is exiled to St Helena in 1815. Napoleon dies of cancer in 1821 at the age of 51. (38.40.00) = The Congress of Vienna accepts the bourgeois gains of the past 25 years, but brings back the monarchy without divine right absolute power. (41.33.00) = The White Terror. . The exiled nobles return to reclaim land, kill peasants. The toll is greater than the reign of terror of the 1790s. (42.42.00) = The Revolution of 1830. The monarchy tries to restore its old power but is stopped by Louis Philippe, and the bourgeois are in control (43.41.00) = Workers' Revolution of 1848. The peasants now have new oppressors: the bourgeoisie. In 1848 a workers' revolution breaks out in various European countries, including the Paris Commune, and is brutally crushed. Karl Marx writes the Communist Manifesto, is expelled to London. (51.56.00) = The Dreyfus Affair. He is a Jewish officer in the army charged with treason, is framed and sentenced to Devil's Island. Emile Zola exposes this as anti-Semitism in his book, "J' Accuse!" and Dreyfus is vindicated. This is also seen as an example of the struggle between the royalists and the anti-royalists. France joins in carving up of Africa by the European colonial power, and had already taken over Algeria much earlier in the 1820s. Germany, now unified, defeats France in the Franco-Prussian War of 1870-1871

20th Century-1st Half. Pre-World War I. The growth of European imperialism as modern industrial countries compete for control of raw materials in undeveloped nations. France and England are rivals for the past 100 years but become allies because of mutual fear of Germany which has become militarily very powerful. Russia enters agreement with France and England against Germany. (6.12.00) = World War I. Germany attacks France through Belgium in the summer of 1914. The war, romanticized by young men, becomes a prolonged slaughter of trench warfare with the machine gun being the worst killing weapon. The suicidal attacks ordered by the officers reflect their negative opinion of the lower class soldiers. American soldiers enter the war in 1917 and the Germans are pushed back. The war ends in 1918. France will never be the same, loses its future leaders. (13.53.00) = Vindictive peace by France and England, supporting the later rise of Nazis. (15.38.00) = The Lost Generation of the 1920s. The cultural center of France, especially Paris, with frivolous living, is an exciting place to be. (17.32.00) = The World Depression. Economic instability leads to the rise of radical political parties. The Communist Revolution in Russia. In France, the Socialist Party is headed by Leon Blum, a Jew, triggering heightened anti-Semitism. Support for fascism in Germany. (19.40.00) = Prelude to war. Germany reoccupies the Rhineland. The Civil War in Spain is supported by the fascists, but the allies keep hands off, and the loyalists are defeated. War clouds loom. The Czechoslovak crisis. Germany takes control of Sudetenland. The 1939 non-aggression pact between Russia and Germany. (24.58.00) = World War II. Germany attacks Poland September 1, 1939, and England and France declare war. The French army is defeated. The German war machine conquers Europe. The 4-year occupation of France is divided between Southern France under puppet leader Pierre Laval, and North France under German occupation. The collaboration line blurs. (28.17.00) = The Occupation. Resistance leadership is often from the Communist Party which is the best organized. The moral questions of the danger of resistance and the fear of retaliation for collaboration. The anti-Semitic support for the Germans, and the contrast of the Huguenots. Charles de Gaulle in exile is in conflict with the Communist resistance movement, sees himself leading France back to glory as a world power. (34.45.00) = France liberated. The Normandy invasion of June 6, 1944, the Battle of the Bulge in the winter of 1944-1945, the push inland. Paris is liberated, not destroyed. Extensive retaliation for collaborators. The war ends in 1945 (36.51.00) = The 20th Century-2nd Half. Politics of post-World War II. The French Communist Party leaders look to Russia for advice. They do not seize power but cooperate, guided by Russian's lack of aggressiveness. De Gaulle's agenda for his power is thwarted, and he retires. The unstable political situation is reflected in France's Empire. (40.34.00) = Vietnam. In Southeast Asia, French Indo-China (Vietnam) is under French control is harshly exploited. After Japan's defeat in World War II, Ho Chi Minh, a nationalist nominally a communist, declares Vietnam independent republic. This is rejected by France. U.S. Cold War interest is to restore France's old empire. A bloody guerilla war is waged from 1946 to 1954 when the French are defeated. As the French leave, the U.S. enters, ignoring warnings. (48.35.00) = Algeria. Algeria is a French colony since the1820s. The French Army goes there and fights from 1954 to 1962. Evidence of torture. Public opinion at home splits. De Gaulle is recalled to power in 1958, is charismatic, nationalistic, creates a strong government called the 5th Republic. In 1960 France withdraws from Algeria. (52.51.00) = Economic crisis of the 1960s. In 1968 students revolt against the anti-democratic policies of De Gaulle. The uprising is put down. A1969 referendum defeats De Gaulle. There is an orderly secession of presidents, usually centrist. (55.42.00) = Current status. Relatively stable government. Immigration causes some instability since needed labor brings Muslims into a Catholic and Christian country. The European Union aims to counterbalance the U.S. as superpower. The welfare state is seen as progressive. France is a faded power but is still a major force in the world