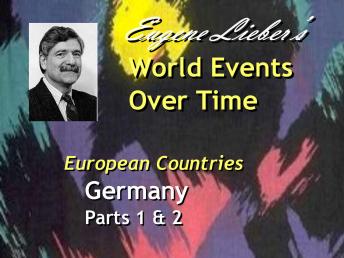 Becoming Germany. Marauding Germanic tribes, in constant warfare, penetrating and then conquering the Roman Empire in 476 AD as it weakens and collapses. The Middle Ages, 1,000 year period of feudalism, a pyramidal structure of loyalty, with the king on the top. Stagnation of population and life. Christianity is its religion, with the Holy Roman Empire more concept than reality. German speaking principalities form alliances with England, France and Austria. (5.13.00) = Protestant Reformation. Martin Luther breaks away from the power of the popes in early 1500s. He is supported by the German princes for materialistic reasons. The masses rise up against the princes, are put down brutally. Brutal 30 Years War 1618 to 1648 between Catholics and Protestants, and its material destruction sets back the German people. (8.51.00) = The Enlightenment..1700s. New ways of looking at the world. Emphasis on science and education, religious tolerance. Frederick the Great of Prussia combines culture with militarism. (11.58.00) = The French Revolution's impact. The French monarchy is in control. The bourgeoisie rises and with it capitalism. European rulers are fearful of uprising of the lower classes, wage war against the French Revolution. (13.29.00) = Napoleon. The French army holds them off and Napoleon emerges. He wins major victories over the European powers, conquers and occupies Central Europe and Germanic Europe. Opposition to occupation includes German philosophic resistance and promotion of German nationalism and superiority. Napoleon is defeated in Russia, regroups, and is finally defeated at Waterloo. (18.17.00) = Congress of Vienna. in 1815 decides the future of Europe. England is a great industrial and naval power. The capitalism of the French Revolution is accepted, but future revolutions are opposed. (21.35.00) = Modern Germany. Prelude to a unified Germany. From the 1850s to 1870s Otto von Bismarck consolidates Prussia's power in a series of wars, results in a confederation of German states. The defeat of France in the Franco-Prussian War of 1870-1871 brings mainly an expanded Prussia. (26.09.00) = United Germany. Kaiser Wilhelm II , king of Prussia, becomes Emperor of United Germany, dismisses Bismarck.
(28.32.00) = German industrial imperialism. Germany, with new technology, challenges and surpasses England by the early 20th century. England and other European powers retain their colonial empires, leaving Germany, the latecomer, dissatisfied in its capitalist quest for markets. Germanic Central Europe. Germany provides cultural leadership in music, literature, and science, reflecting the growing power of modern Germany.. (33.19.002) = Potential collision course with England. Alliance of England and France against Germany: the Entente Cordiale of 1904. It includes Russia to pin Germany in the middle. The Triple Alliance between Germany, Austro-Hungary, and Italy. Both sides arm to the teeth, ultimately leads to war (37.18.00) = World War I. The assassination of the Archduke Ferdinand in Sarajevo in 1914, and war is declared. Germany is prepared to fight on 2 fronts by following the von Schleiffen Plan: knock out France quickly and take on Russia later. The war is romanticized by young officers. The German advance is stopped 20 miles from Paris. (42.58.00) = Trench Warfare. It is now a war between the French trenches of the Maginot Line and the German trenches of the Siegfried Line. Enormous casualties on both sides caused mainly due to the new technology of the machine gun. The class attitude of officers who order suicidal attacks by lower class soldiers. After the slaughter Europe is never the same. (47.27.00) = The U.S. enters the war in 1917 after encounters with German submarine warfare, and public opinion turns against neutrality. American troops quickly move overseas. The German offensive of 1918 fails, their armies are pushed back to Germany, and the war ends November 11, 1918. The German Emperor abdicates and the Weimar Republic begins. Uprisings in Germany and elsewhere in Europe do not succeed, unlike the Bolshevik Revolution in Russia. (1.04.37.00) = The Treaty of Versailles. Despite President Wilson's positive vision, England and France enact a punitive treaty against Germany. Although all sides play a role leading up to the war, Germany is held to be solely responsible, with harsh reparations imposed. John Maynard Keynes sees the economic consequences of this as disastrous. (1.08.06.00 = The Rise of Fascism. Weimar Republic. Shaky democracy. Long history of autocracy in Germany and especially Prussia. Major left wing revolutionary parties emerge. Karl Marx and the Communist Manifesto. Long history of social legislation in Germany, predating some Western democracies. Strong Socialist Party calling for gradual evolution. Russian Bolshevik Revolution impact. Strong working class and disciplined Communist Party. (1.10.58.00) = The Nazi Party. Ultranationalist parties opposed to the Treaty of Versailles emerge in Germany. An attempted putsch in the 1920s by the Nazi Party led by Adolph Hitler fails. Hitler is given a light jail sentence where he writes "Mein Kampf," his blueprint for the future. There is considerable support for the Nazi Party from the bitterness and humiliation of the peace treaty. There is a huge world-wide inflation and the Great Depression in the 1930s, creating economic havoc. (1.16.07.00) = Fascism. . Started by Benito Mussolini in Italy who comes to power in 1927. Fascism is shared by Hitler and others. The concept of the all- powerful leader. Not just dictatorship but totalitarianism, total control. The image of the masses as undifferentiated and to be told what to do. The celebration of violence. Virility as a culture. Women are just for breeding. Racist ideology. Existing European anti-Semitism is greatly exploited by the Nazis, with disastrous consequences. (1.31.01.00) = Hitler in power. Hitler, charismatic, is elected chancellor in 1932. Rearming for war is a way out of the economic depression. Nazis crush the Communists, Socialists, and organized labor. His nationalistic appeal.