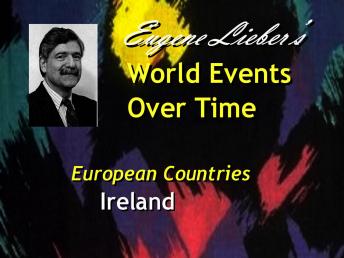 Early History. Irish sense of tragedy. Irish stereotypes of good natured Irish cops, etc., blinds us to the harsher reality. (2.09.00) = Catholicism has a major role. St. Patrick in 1640 AD brings a controlling form of Catholicism to Ireland. The Vikings invade in the 8th & 9th centuries A.D. The English invade and take control, place population in peonage. In artistic images the English portray the Irish as sub-human. England becomes Protestant, Ireland remains Catholic. Irish attempt to compete with England in clothing production in 1690 is crushed (6.22.00) = Migration to England. The Irish migrating to England to find work are harshly treated. The Irish are excluded from public life. (6.59.00) = Irish rebellions. A series of Irish rebellions in the 1500s is crushed by England. Later, Ireland supports the French Revolution because France is an enemy of England. (12.01.00)= Response to the Irish rebellions. England makes some concessions but keeps the people in poverty. Oliver Cromwell wants to develop the middle class, promotes reforms, grants religious protections (14.10.00) = Mid 19th Century. Resistance. Arising from a sense of frustration, and without central planning, nationalistic, secret societies emerge, become a unifying force, with a goal of total independence (19.19.00) = The Potato Famine of 1840. Forced by England to grow mainly the one crop, combined with the potato blight, the famine results in possibly 1,000,000 deaths. England does nothing. Ireland loses population from the 1840s on due to emigration to the U.S. and elsewhere. (26.52.00) = Irish immigrants are a despised minority in the U.S. because they are Catholic in a Protestant country. In the American Civil War, the draft riots by Irish against blacks is put down violently.. (30.52.00) = Strong ties between Irish in America and family back home. Ireland remains undeveloped.. (33.37.00) = 20th Century. Class differences within U.S. Irish. Lace Curtain Irish versus the Shanty Irish. Irish find the police force and politics are ways out of poverty in the U.S. Boston is a major Irish center. (36.02.00) = Rejection of the English language in Ireland, promoting the return to Gaelic. Northern Ireland. Protestant English create settlements since the 1600s, become the majority, but remain a foreign element. Over time they remain a thorn to the Irish population. (38.02.00) = Irish Nationalism. During World War I, the Irish, hating England, remain neutral, but with strong pro-German feelings. The 1914 Easter Rebellion against English troops is put down. The Black & Tans impose militaristic control in Ireland, treat the Irish viciously. (41.28.00) = Attempts to settle. 1922 agreement gives Ireland political autonomy, excludes North Ireland, resulting in a divided country and civil war. De Valera wants all or nothing, Collins seeks a compromise agreement, splitting the Irish. Collins is assassinated. Struggle for the Irish Free State continues for decades. During World War II, Ireland remains hostile to England. (44.24.00) = United Ireland is unresolved.. "The Troubles." The IRA has a violent wing which aims to rid Ireland of the Protestant element. This is not only a religious issue but a class issue. In Northern Ireland Protestants have access to better jobs than the Catholics. Riots in Northern Ireland against the presence of English troops. Ireland remains poor and undeveloped, losing population, with alcohol often the response to grinding poverty, and violence on both sides. Role of the church. Preaches toleration of suffering. (50.21.00) = Recent history. Diminished influence of the Catholic Church. Women's role grows. Reforms increase. Emigration lessens. Agriculture is still significant but there is a change to urban life away from the farm. Resolution to the North Ireland violence. Hopeful signs that Ireland is in a stage of development. Ireland has a proud heritage and history.