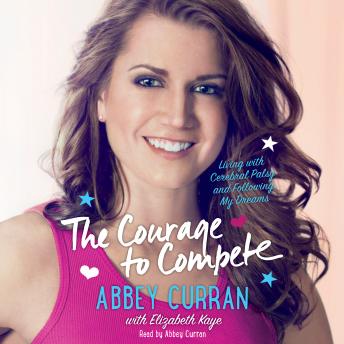 The Courage to Compete: Living with Cerebral Palsy and Following My Dreams

A remarkable memoir by Miss Iowa USA Abbey Curran about living with cerebral palsy, competing in Miss USA, and her inspiring work with young women who have disabilities.

Abbey Curran was born with cerebral palsy, but early on she resolved to never let it limit her. Abbey made history when she became the first contestant with a disability to win a major beauty pageant. After earning the title of Miss Iowa, she went on to compete in Miss USA.

Growing up on a hog farm in Illinois, Abbey competed in local pageants despite naysayers who told her not to. After realizing her own dream, she went on to help other disabled girls achieve their goals by starting Miss You Can Do It, a national nonprofit pageant for girls and women with special needs and challenges, which became the subject of an HBO documentary with the same name. This is Abbey’s story.

Courage to Compete: Living with Cerebral Palsy and Following My Dreams