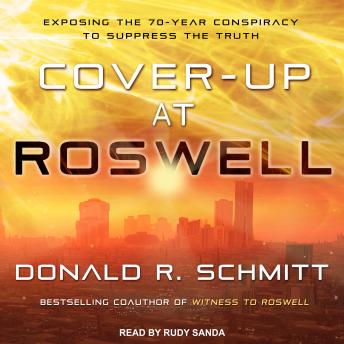 Cover-Up at Roswell: Exposing the 70-Year Conspiracy to Suppress the Truth

As we approach the seventieth anniversary of the most significant UFO event of all time, bestselling author Donald R. Schmitt takes a fresh look at the renowned incident. Previous books on Roswell, including his, have focused on the witnesses, their families, and the history of the case. Cover-Up at Roswell catalogs the extreme measures the U.S. government exercised to suppress the truth.

How they silenced military witnesses clearly demonstrates their need to prevent the facts from leaking out. But more disconcerting are the tactics used against civilians and the media.

Over the years, the government has actually issued four different explanations for what took place in 1947, yet Roswell remains a mystery, shrouded in secrecy, cover-ups, and deception. Is a fifth explanation at hand?

Cover-Up at Roswell includes fascinating new information, such as:

The most comprehensive timeline of events ever written
What the base commander's secretary confessed
The answers to the twenty most frequently asked questions about Roswell
The Roswell 'smoking gun,' provided by one of the very arbiters of the cover-up

The search for the truth about Roswell continues. Are we brave enough to accept it?

Cover-Up at Roswell: Exposing the 70-Year Conspiracy to Suppress the Truth

This title is due for release on June 19, 2017
We'll send you an email as soon as it is available!