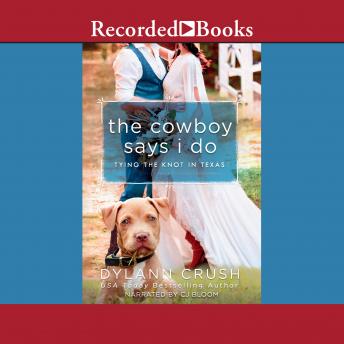 The Cowboy Says I Do

It's anything but a wedding cake walk for the mayor and the deputy sheriff when they team up to reinvent the town of Idont, Texas to Ido. Newly elected mayor, Lacey Cherish, ran for office to redeem the family name after her father had to resign for un-mayorly like conduct. But if she wants to salvage her family's reputation, along with the town's economy, she'll need to think fast. With few options at hand, she starts to rebrand Idont as Ido, as the most romantic place in Texas to tie the knot. Lacey's grand plans have just made Deputy Sheriff Bodie Phillips's life a whole lot harder. He's got bigger problems than helping the mayor bring in brides. Like figuring out why his dad and grandfather mysteriously shut down the family business, and who's abandoning dogs within the town limits. When Lacey's chance at getting major publicity for Ido's first wedding is jeopardized, she's forced to rely on Bodie for help. But as their attraction heats up, they both have to decide how far they're willing to go to revive the town and their families' honor.

Cowboy Says I Do