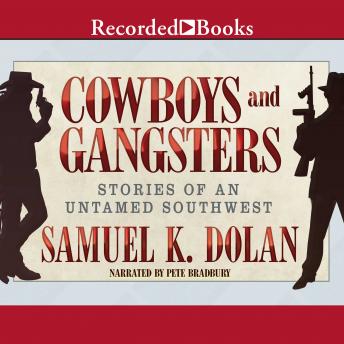 Cowboys and Gangsters: Stories of an Untamed Southwest

Even after WWI had ended, the region of Arizona, New Mexico, and West Texas stubbornly refused to be tamed. It was still a place where frontier gunfights still broke out at an alarming rate. Utilizing official records, newspaper accounts, and oral histories, Cowboys and Gangsters tells the story of the untamed 'Wild West' of the Prohibition-era of the 1920s and early 1930s and introduces a rogues' gallery of sixgun-packing western gunfighters and lawmen. Told through the lens of the accounts of a handful of Texas Rangers and Federal Agents, this book covers a unique and action-packed era in American history. It's a story that connects the horse and saddle days of the Old West, with the high-octane decade of the Roaring Twenties.

Cowboys and Gangsters: Stories of an Untamed Southwest

This title is due for release on May 2, 2016
We'll send you an email as soon as it is available!