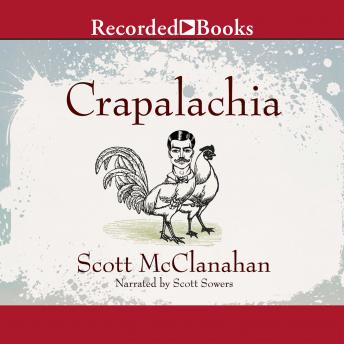 Crapalachia: A Biography of Place

'McClanahan's prose is miasmic, dizzying, repetitive. A rushing river of words that reflects the chaos and humanity of the place from which he hails. [McClanahan] aims to lasso the moon... He is not a writer of half-measures. The man has purpose. This is his symphony, every note designed to resonate, to linger.' -- New York Times Book Review ' Crapalachia is the genuine article: intelligent, atmospheric, raucously funny and utterly wrenching. McClanahan joins Daniel Woodrell and Tom Franklin as a master chronicler of backwoods rural America.' -- The Washington Post 'The book that took Scott McClanahan from indie cult writer to critical darling is a series of tales that read like an Appalachian Proust all doped up on sugary soft drinks, and has made a fan of everybody who has opened it up.' -- Flavorwire 'McClanahan' s deep loyalty to his place and his people gives his story wings: 'So now I put the dirt from my home in my pockets and I travel. I am making the world my mountain.' And so he is.' -- Atlanta Journal-Constitution '[ Crapalachia is] a wild and inventive book, unquestionably fresh of spirit, and totally unafraid to break formalisms to tell it like it was.' -- Vice 'Part memoir, part hillbilly history, part dream, McClanahan embraces humanity with all its grit, writing tenderly of criminals and outcasts, family and the blood ties that bind us.' -- Interview Magazine 'A brilliant, unnerving, beautiful curse of a book that will both haunt and charmingly engage readers for years and years and years.' -- The Nervous Breakdown 'McClanahan's style is as seductive as a circuit preacher's. Crapalachia is both an homage and a eulogy for a place where, through the sorcery of McClanahan's storytelling, we can all pull up a chair and find ourselves at home.' -- San Diego City Beat 'Epic. McClanahan' s prose is straightforward, casual, and enjoyable to read, reminiscent at times of Kurt Vonnegut. Crapalachia is one of the rare books that, after you reach the end, you don' t get up to check your e-mail or Facebook or watch TV. You just sit quietly and think about the people of the book and how they remind you of people you used to know. You feel lucky to have known them, and you feel grateful to McClanahan for the reminder.' -- Rain Taxi Review of Books When Scott McClanahan was fourteen he went to live with his Grandma Ruby and his Uncle Nathan, who suffered from cerebral palsy. Crapalachia is a portrait of these formative years, coming-of-age in rural West Virginia. Peopled by colorful characters and their quirky stories, Crapalachia interweaves oral folklore and area history, providing an ambitious and powerful snapshot of overlooked Americana. Scott McClanahan is the author of Stories II and Stories V! His fiction has appeared in BOMB , Vice , and New York Tyrant . His novel Hill William is forthcoming from Tyrant Books.

Crapalachia: A Biography of Place