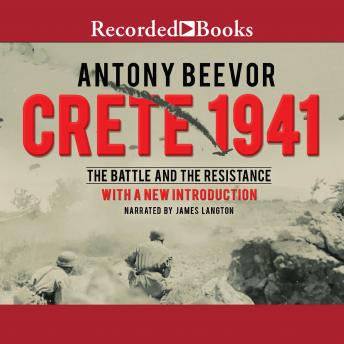 Crete 1941: The Battle and the Resistance

The bestselling author of Stalingrad and D-Day vividly reconstructs the epic WWII struggle for Crete - reissued with a new introduction. Nazi Germany expected its airborne attack on Crete in 1941 to be a textbook victory based on tactical surprise. Little did they know that the British, using Ultra intercepts, had already laid a careful trap. It should have been the first German defeat of the war when a fatal misunderstanding turned the battle around. Prize-winning historian and bestselling author Antony Beevor lends his gift for storytelling to this important conflict, showing not only how the situation turned bad for Allied forces, but also how ferocious Cretan freedom fighters mounted a heroic resistance. Originally published in 1991, Crete 1941 is a breathtaking account of a momentous battle of World War II.

Crete 1941: The Battle and the Resistance