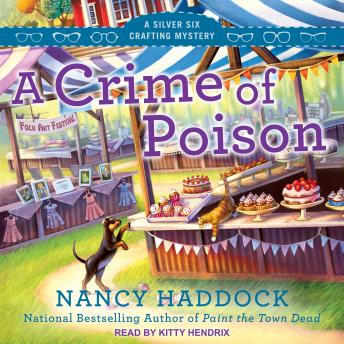 A Crime of Poison

The Silver Six are known for their arts and crafts-but they're about to be tested in the art of catching a crafty killer.

It's early October, time for the Fall Folk Art Festival and Bake Sale in Lilyvale, Arkansas. Every business along the town square will benefit from the event, including the craft store run by Leslee Stanton Nix-a.k.a. Nixy-and the Silver Six, a group of retirees. In charge of making the festival go smoothly, Nixy is confident that it will be a success.

But things become knotty when local troublemaker Cornell Lewis is found dead with a plate of Snickerdoodles from the bake sale. Two members of the Silver Six are accused of cooking up a murder plot, but Nixy knows that the cookies weren't literally to die for. With time running out, Nixy and company must catch the actual killer . . . before the Silver Six find their number permanently reduced to four.