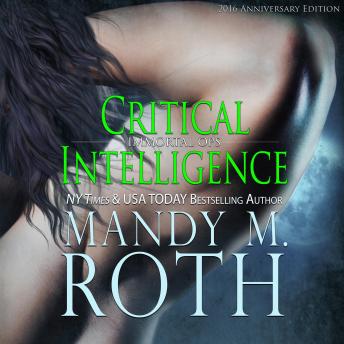 When loyalties are questioned and bonds forged, the Immortal Ops find themselves fighting a war to guard not only their secrets, but their lives as well.

Missy Carter leads a rather boring, overworked life as a system analyst for the State Department or rather, that’s what she lets everyone believe. In reality her life is anything but boring. As a Shadow Agent with the Paranormal Security and Intelligence, she’s seen and done it all. Intelligence is her specialty, assassination is her hobby. The only problem is that the things she spies on don’t die easily. In fact, some of them were dead to begin with. She’s learned to handle anything life can throw at her. That is until the biggest paramilitary pain her backside shows up again. Lucky for him, he’s good looking.

Roi Majors, wolf-shifter and second in command of the I-Ops, is having a hard time believing that Intel can only get half the information needed to bring down an underground ring of vampires with big-spending backers who are hell-bent on creating a race of supernaturals with multiple strands of DNA in them. When he finds himself paired with the one woman in the world who seems immune to his self-proclaimed charms, he can’t wait to see her to safety and then bid her good riddance. He never counted on falling in love with her. And he sure in the hell never counted on her claiming to be an agent with a branch of the government no human should know about.

★★★★★ 5 Stars--“If you love a good Romantic Suspense of the Paranormal kind full of sexiness, action, and… likable characters then you need this story and these series in your life.”—Keeper Bookshelf Blog

★★★★★ 5 Stars—“There were times when I felt transported into a Marvel movie, complete with the kickass, take no prisoners super heroine Melissa Carter.”—Goodreads.com