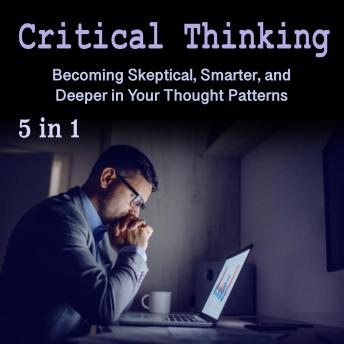 This is a 5-book bundle with the following topics in it:


Topic 1: The philosophers from the east (China, other countries in Asia, etc.) have many things in common with the ancient philosophers in the west (Greece, Eurasia, etc.). But there are differences too.

In this guide, we will highlight and compare some of these differences and similarities. Some other chapters are devoted to several philosophers from both regions in the world, namely Pythagoras, Mo Ti, and Aristippus of Cyrene.

Topic 2: A lot of people have heard of stoicism, some even know what it is, but the question is: How do you become more stoic?


The answer to this question lies at the heart of this book. You will learn of new methods and insights to accomplish this. Furthermore, some very important quotes about stoicism will be revealed.

Topic 3: Skepticism has been criticized, ironically, and optimism has been glorified beyond all reason. There are sub-cults in the self-help industry that will judge anyone who questions the claims of gurus, and there are many people who are afraid to doubt the things they are told. Today, we need more skepticism in science and psychology. We need people who don’t take claims as truth when they have not been fully proven.

Topic 4: In this guide, you will receive greater comprehension of what fallacies are and close your blind spot to the truth of things.


Later, the author goes on to instruct you on inductive and deductive reasoning, which are two techniques that help people reach logical conclusions without going astray in their paths of thinking.

Topic 5: In this book, you will learn more about the lives and theories of prominent existential philosophers and theorists, such as Kierkegaard, Nietzsche, Heidegger, Sartre, and others.