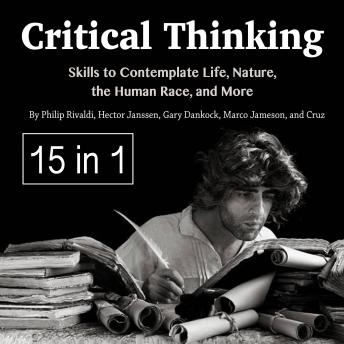 This is a 15-book bundle with the following topics in it:


Topic 1: Confucius has definitely left a mark on the world of Eastern philosophy. His ideas were revolutionary and impressive enough for people to follow him, record his works, and start a group of devoted followers. In the first chapter, more light will be shed on this.

The second philosopher mentioned in this guide, is Aristotle, a sharp-minded, focused thinker who received a name with fame. His clinical examinations and his references to Plato and Socrates are known in Greek history.

Topic 2: Stoicism is a concept that has been studied more and more lately. The philosophy that dates back all the way to Socrates has been significant in many people’s lives. So, today, we will expand on what stoicism is, where it originated from, and how you can use it in your life to become a better person and achieve more.

Topic 3: We will also explore the concepts of criticism, parapsychology, the role of science in skepticism, and the subtle art of being positive while being skeptical. Skepticism helps us think critically and question statements and claims, which helps us get closer to the truth. If this is something you’d like to get better at, then I encourage you to take a look at this book.

Topic 4: Critical thinking means, among others, that you look at multiple sides of a controversial topic, that you can stay objective and put away your biases until you have reached a firm conclusion based on verifiable facts. This skill is highly valuable in job interviews, relationships, and everyday life.

Topic 5: In today’s guide, we’ll discuss the nature of existentialism and nihilism, two co-existing philosophies that have embraced by many. Nietzsche and Kierkegaard play a major role in these movements, so their works will be quoted and explained.