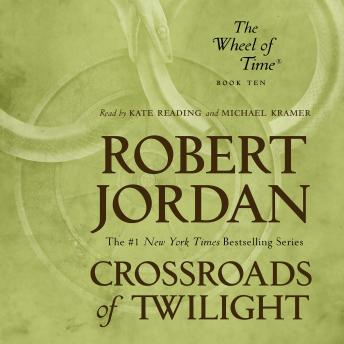 Crossroads of Twilight: Book Ten of 'The Wheel of Time'

In Crossroads of Twilight, the tenth novel in Robert Jordan’s #1 New York Times bestselling epic fantasy series, The Wheel of Time®, Rand al'Thor and his allies endure trials by fire amidst battles, sacrifices, and treachery.

Fleeing from Ebou Dar with the kidnapped Daughter of the Nine Moons, whom he is fated to marry, Mat Cauthon learns that he can neither keep her nor let her go, not in safety for either of them, for both the Shadow and the might of the Seanchan Empire are in deadly pursuit.

Perrin Aybara will stop at nothing to free his wife Faile from the Shaido Aiel. Consumed by rage, he offers no mercy to those he takes prisoner. And when he discovers that Masema Dagar, the Prophet of the Dragon, has been conspiring with the Seanchan, Perrin considers making an unholy alliance.

Rand al'Thor, the Dragon Reborn himself, has cleansed the Dark One's taint from the male half of the True Source, and everything has changed. Yet nothing has, for only men who can channel believe that saidin is clean again, and a man who can channel is still hated and feared—even one prophesied to save the world. Now, Rand must gamble again, with himself at stake, and he cannot be sure which of his allies are really enemies.

I don't know why anyone in their right mind would give this book a one star. This book was really good. I would say it is one of the better books. It wasn't as slow as as some made it out to be. Of course there were some parts but that has to be expected. The narrators were great. One commented that Cramer sounded monotone like he was tired. I disagree with that. He did an excellent job as,well as Kate Reading. Great series, great book. Don't take my word for, check it out for yourself.

"Cross Roads of Twilight" was the ABSOLUTE WORST book in this series so far! Almost devoid of action and filled with stupid detail of what the women are wearing and just useless dialog fluff. The major thing was the cleaning of Sidene, which you would think deserved a chapter or 4 on how the Ashamen and maybe even the male Forsaken reacted to it, not to mention how Rand felt, but NOTHING! It's mostly about very boring Aisedi (sp?) banter, which was useless. I'm starting to think that he took a break and had his wife write this one, not that I'm a misogynist, far from it, but it's just filled with feminine blather about what the female characters are wearing and hardly any good action sequences. He stated that in past books, he had his wife check the entire manuscript. I really hope that "Knife of Dreams" is better. From the below reviews about Michaels narrating, I think that he was trying to offset Kate's feminine detail with a more masculine "just the facts" approach, not that I agree with it. In "Knife of Dreams", it seems he's coming to life a bit more, which is good. Skip this book and you won't be lost at all, just read a quick synopsis and save yourself a lot of time, some money and a lot of frustration!

Far too much detail. The writer goes on and on about the character's thoughts and motives but there is no action...no resolution...no story. The entire thing is very disjointed and difficult to follow. If you're looking for something enjoyable to occupy your mind while you relax or drive down the road this is not it. This will put you to sleep faster than the highway.

I agree with most of the opinions that here is way to many characters and way to much filler in most of these books if I haven't got so far into them I would quit listening but heard the author that finished the series does a better job. Wizards first rule series was much better.

Not the most exciting in the series but it is still a great addition none the less.

Narrators: Amazing job, again. Can't say enough about the two who narrate these books. The audiobook itself was also much better with clear chapter breaks with the tracks. Book: Everything that could be said of this installment has already been stated ad nauseam in my reviews of the past several books. It is nearly 700 pages (in paperback) of needless minutiae and no plot advancement. It ends in yet another cliff hanger, literally not picking up until the final 10 pages, and that represents the sum total of the real important information in the entire book. This book is nothing but filler. I hope this trend ends with Knife of Dreams.

Love the story and by this time anyone will work their way through this novel and the next however I have to say it idoes not stand alone. It is simply a continuation of the story with a greater affinity towards character development which makes you question your former negative opinions of key characters in the previous novels.

I love this series. Amazing!

*THIS REVIEW CONTAINS SPOILERS* Let me start by saying I am not quite finished with this book yet. I listen to them at work and while I'm driving, so I'll probably finish it today. I see a lot of people feel this is book is basically fluff, and I understand the feeling. We jump around so much that it feels like no one plot gets very far or accomplishes anything. I think the reason he did this is because Rand cleansing the source was such a big deal, and Jordan wanted to show how everyone across the world reacted to it. Honestly, I was looking forward to the reactions, but I never really got the ones I wanted. I wanted the Asha'man to feel it and react, but we didn't really get much there. We had way more female characters freaking out over it when the Asha'man should have been absolutely stunned and thrilled. Yet we basically get nothing from them. The only thing I've found actually frustrating is right when a character has something important to say, Jordan will draw out the wait before you actually get to hear what is to be said. He'll talk about clothes, or the rank of soldiers down a line, or some other nonsense with the apparent attempt of creating suspense. It's just...silly. The last thing I have to say is regarding Kramer. I seriously feel like he's getting bored with the books. He read almost everything in the same flat/bored monotone no matter who was speaking or what they were speaking about. Kramer has never been a favorite of mine considering he can be talking about someone's grief or death in the same "matter of fact" tone and style as if he were talking about setting the table for dinner. It's a bit annoying. The accent he gives the Seanchan is also terrible. It makes me cringe. The narrators should get together and actually listen to one another. Kate is amazing as always. I just wish she'd make up her mind about how she's going to pronounce certain names.

This book has ME at a crossroads. Do I continue? Can I possibly stand any more of this interminable dragging along? This book is my least favorite of the series so far.

This book was a total waste of time. I love the series, but each book seems to have less substance than the one before. Finally, in Book 9, something actually happened and I was looking forward to hearing this one. However, this book seems to be made up entirely of filler. Most of the book takes place at the same time as the events described in Book 9. At the end, there is only one minor advancement in one of the character's situations. If you just read Book 11 and skipped this one, I seriously doubt that you would miss anything of import.

Not one of his better volumes. There was so little that got accomplished, that it felt more like a soap opera, than a fantasy adventure novel.

Their are neither beginnings nor endings on the wheel of time, that seems especially true for Jordan's series. Jordan has stumbled on the path. In the last book, Winter's Heart, Jordan recaptured a lot of what he lost in terms of momentum, but this books stalls and does not move the story significantly. At the end of Winter's Heart, Rand cleansed the source of the dark one's taint. This books deals with everyone else in that same period, which is highly frustrating because you want to shake the character and let them know all that has happened. It deals in depth with Egwene and the Aes Sedai's siege and even carries along Matt's courtship of the daughter of the nine moons, but does not really move anything significantly. We visit briefly with Rand and Perrin, but neither really has anything resolved. All the characters are almost exactly, story development wise, where they were at the end of Winter's Heart. The surprise ending moves one person somewhere new.

I am currently in the Navy and read book one through ten and absolutly loved them all. I recomended book one to a friend who then picked up book 2 and gave 1 to another friend and so on and so on, until half the ship had this big bulky book sticking out of their back pocket. The characters are so real and though it is fantasy, and based on "A time long past" you feel the conection of modern day good and evil. Reading the series helped keep me from being glued to the telivision for a 10 month deployment. Now I plan to listen to the series while I run in the mornings to chase the bordom away.

This book was a waste of time. I can't believe I waited by the mailbox looking for this material. The story was completely boring and the end was such a let down that I probably won't pick up another Robert Jordan tome. It took me a little over a year to read and listen to this entire saga and to say I was disappointed is just an understatement.. Check out Mercedes Lackey, or someone else.