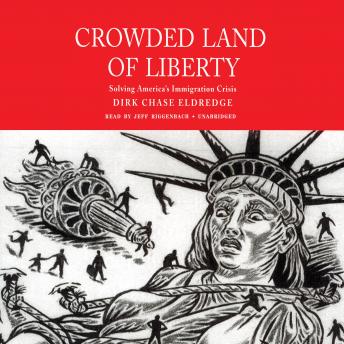 The number of legal immigrants accelerated in the 1990s to an average of more than a million a year. That was up from just over 300,000 a year in the 1960s and 600,000 a year by the 1980s. When the number of illegal immigrants is added to this, the total inflow during the 1990s was approximately 12 million. That compares with 500,000 in the 1930s.
Crowded Land of Liberty examines how this developed into a crisis contributing to overcrowded schools, soaring demand for social services, new burdens on taxpayers, increased urban congestion, and heightened job competition. The author explains how recent waves of immigration differ from those of earlier eras, and he explores new public policy alternatives.

If you want to know why our roads, schools, social services and taxes are rising look at the nearest illegal alien living in your community. This audio book describes how the immigrant has changed from an assimilated American to an immigrant who believes that America should support them in our hospital, welfare, and speak their language. American should learn Spanish rather than the immigrant learning English. Interesting audio book that hopefully will get the American public active in the growing illegal immigrant issue. Build a board wall, policing by the National Guard, penalize employers, and deport illegal aliens will alleviate this issue. I hope that Americans will write their elected leaders and demand results, if not we will lose America to our Southern illegal immigrant. Don't support this massive influx.