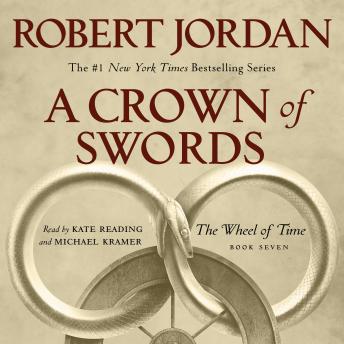 A Crown of Swords: Book Seven of 'The Wheel of Time'

In A Crown of Swords, the seventh novel in Robert Jordan’s #1 New York Times bestselling epic fantasy series, The Wheel of Time®, a rebellious uprising threatens Rand al’Thor's rule as he prepares to battle an even more dangerous enemy.

Incited by nobles seeking to reclaim their places of power, armies march against the Dragon Reborn. As Rand tries to restore order, he discovers a lack of loyalty even among the warrior Aiel, and still mistrusts the rebel Aes Sedai even though they swore allegiance.

But nothing can stop Rand and his Asha'man soldiers from storming the city of Illian to confront the Forsaken Sammael, and challenge him to a duel of the One Power with the winner taking the Crown of Swords...

Since its debut in 1990, The Wheel of Time® by Robert Jordan has captivated millions of readers around the globe with its scope, originality, and compelling characters. The last six books in series were all instant #1 New York Times bestsellers, and The Eye of the World was named one of America's best-loved novels by PBS's The Great American Read.
The Wheel of Time®
New Spring: The Novel
#1 The Eye of the World
#2 The Great Hunt
#3 The Dragon Reborn
#4 The Shadow Rising
#5 The Fires of Heaven
#6 Lord of Chaos
#7 A Crown of Swords
#8 The Path of Daggers
#9 Winter's Heart
#10 Crossroads of Twilight
#11 Knife of Dreams

love the book the series is one of my all time favorites.

Slower than the previous installments but an absolute treasure. Narration is top notch and writing quality is near perfection. Robert Jordan's works are all on the highest level of fantasy literature.

The narrators of this series are stellar. A better pair could not have been found. Sadly, the novel itself I found below the standard of the rest of the series. Story development has slowed drastically and the majority of female characters are developed in a way that I do not enjoy. Furthermore, this installment makes like of sexual harassment of one of the male characters, which, in conjunction with Jordan’s tendency to hyper focus on the chest area of his female characters made it an uncomfortable listen for me.

Love the books by Robert Jordan. Fun for the whole family.