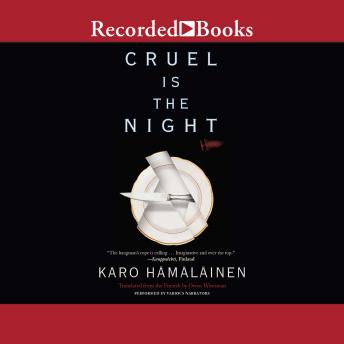 Cruel is the Night

Inspired by puzzle-mystery great Agatha Christie, prizewinning Finnish author Karo Hamalainen's first novel in translation is a comedy of murderous intentions Three cell phones ring in an opulent London suite. The calls go unanswered, because their recipients are dead. Earlier that night, four old friends and lovers meet for a reunion dinner. Miko and Robert haven't seen each other in ten years; Miko hates Robert for the money he's made with shady ethics. Unbeknownst to Miko, his wife, Veera, also slept with Robert the last time everyone was together. Robert's young trophy wife, Elise, has no old grudges to bear, but will be swept up in the murderous fray. Not only does every diner have a bone to pick with another, but there's an arsenal of deadly weapons hiding in plain sight. And by the end of the night, there will only be one.

Cruel is the Night