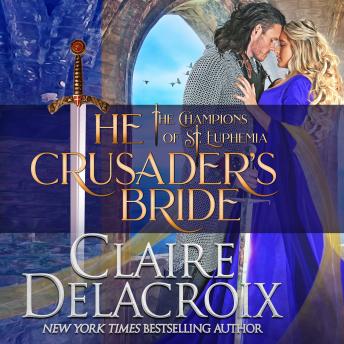 The Crusader's Bride: A Medieval Romance

Gaston battled for duty and honor-until his new wife tempted him to fight for her love.
When the Templar knight Gaston learns that he has inherited his father's estate in France, he accepts one last quest for the order and agrees to deliver a package to Paris on his way home. A practical man, Gaston knows he has need of a wife and an heir, so when a lovely widowed noblewoman on pilgrimage snares his gaze, he believes he can see matters solved to their mutual convenience.
But Ysmaine is more than a pilgrim enduring bad luck. She has buried two husbands in rapid succession, both of whom died on her nuptial night, and believes herself cursed. Accepting this gruff knight seems doomed to result in his demise, but Gaston is dismissive of her warnings, and Ysmaine finds herself quickly wed again-this time to a man who is not only vital, but determined to survive.
Neither of them realize that Gaston's errand is one of peril, for the package contains the treasure of the Templars-and some soul, either in their party or pursuing it, is intent upon claiming the prize at any cost. In a company of strangers with secrets, do they dare to trust each other and the love that dawns between them?