Crush the Cell: How to Defeat Terrorism Without Terrorizing Ourselves 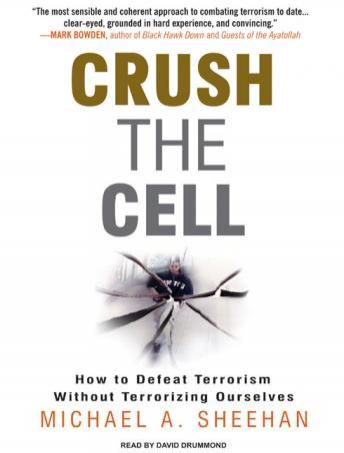 Written By: Michael A. Sheehan

Written by a man who is arguably the country's most authoritative voice on counterterrorism, Crush the Cell demolishes, with simple logic, the edifice of false 'terror punditry' that has been laid, brick by brick, since 9/11. A veteran of special ops, international diplomacy, and bruising clashes with federal law enforcement agencies, Michael A. Sheehan delivers in this book a two-part message: First, that we've wasted-and are continuing to waste-billions of dollars on the wrong protective measures; and second, that knowing the bad guys' next move is paramount.

Somewhere in America, Sheehan maintains, are a number of terrorist cells, their members' heads filled with schemes of mayhem and destruction. Motivated not, as some believe, by feelings of disenfranchisement, disdain for freedom, or economic envy but by a compelling ideological hatred, these individuals plot not just terror but paralyzing terror-the kind that can shut down a country.

Unwittingly aiding and abetting them are many (but not all) 'terror experts' and members of the media who, for reasons that are partly self-serving, rate the bad guys' capabilities far higher than they are, playing into terrorists' hands with their hype. Spurred by the pundits' inflated assessments, legislation follows that drains billions from taxpayers' pockets and pours money into a bloated Washington bureaucracy championing needless programs.

Here, Sheehan shows why defensive fortresses don't work whereas offensive operational intelligence does. He also peels back the mystery surrounding terrorist cells, portraying them as typically a group of bumblers searching for a charismatic leader who has what it takes to conduct a complex symphony of violence. Sharing time in the narrative spotlight are not just agents of al Qaeda but also frighteningly destructive lone wolves, cults, and radical movements.

In his career, Sheehan has operated in the mountain jungles of Central America, the back alleys of Mogadishu, and the teeming streets of New York City-but he has also participated at the highest levels of policy making at the White House, the State Department, and the United Nations. It is his time protecting America's most populous city as its counterterrorism czar, however, that yields this book's most fascinating insights. As Sheehan reveals thwarted threats to New York's bridges, subways, and landmarks, and recounts extraordinary simulations staged to gauge terrorists' true abilities, we gain perhaps the clearest picture yet of what modern terror fighting is all about.

Crush the Cell: How to Defeat Terrorism Without Terrorizing Ourselves

by Michael A. Sheehan