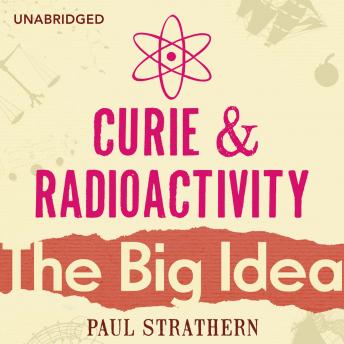 At a moment of great discovery, one Big Idea can change the world...Marie Curie had one of the finest scientific minds of the twentieth century, overturning established ideas in both physics and chemistry. She had an equally profound effect in the social arena, challenging the commonly held belief that women were intellectually inferior to men. Her work influenced current cancer research and her exploration of radioactivity was groundbreaking.Curie & Radioactivity tells the captivating story of Curie's early life in which she worked as a governess to support her sister during medical school, through to her later life, as the first person ever honoured with Nobel Prizes in two different sciences. Her untimely death from cancer, due to overexposure to radium, marked the end of an exceptional career of a woman who was ahead of her time and never far from controversy. The Big Idea: Curie & Radioactivity is accessible and absorbing, placing Curie's remarkable life in the context of the times and rendering the essence of her unprecedented discoveries in a form comprehensible even to non-scientists.The Big Idea series is a fascinating look at the greatest advances in our scientific history, and at the men and women who made these fundamental breakthroughs.