Curse of the Spider King: The Berinfell Prophecies Series - Book One 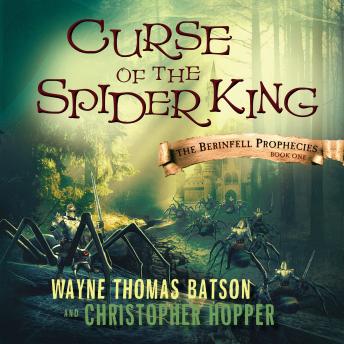 Fantasy. Mystery. Action. Humor. Parents, teachers, and librarians will no longer have to push kids to read—The Berinfell Prophesies will engage intermediate readers and leave them clamoring for more.

The Seven succeeding Elven Lords of Allyra were dead, lost in the Siege of Berinfell as babes.  At least that’s what everyone thought until tremors from a distant world known as Earth, revealed strange signs that Elven blood lived among its peoples. With a glimmer of hope in their hearts, sentinels are sent to see if the signs are true. But theirs is not a lone errand. The ruling warlord of Allyra, the Spider King, has sent his own scouts to hunt down the Seven and finish the job they failed to complete many ages ago.

Now 13-year-olds on the brink of the Age of Reckoning when their Elven gifts will be manifest, discover the unthinkable truth that their adoptive families are not their only kin. With mysterious Sentinels revealing breathtaking secrets of the past, and dark strangers haunting their every move, will the young Elf Lords find the way back to the home of their birth? Worlds and races collide as the forces of good and evil battle.  Will anyone escape the Curse of the Spider King?

Curse of the Spider King: The Berinfell Prophecies Series - Book One