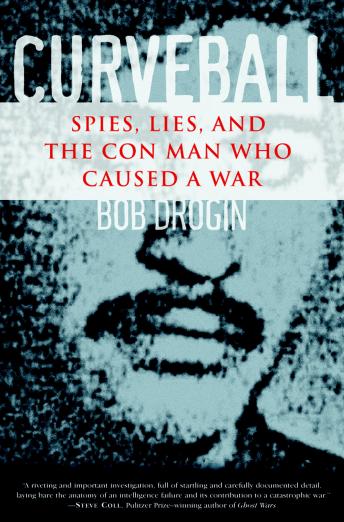 Curveball: Spies, Lies, and the Con Man Who Caused a War

“A crucial study in the political manipulation of intelligence, understanding how Curveball got us into Iraq will arm us for the next round of lies coming out of Washington.”—Robert Baer, author of See No Evil: The True Story of a Ground Soldier in the CIA's War on Terrorism

Curveball answers the crucial question of the Iraq war: How and why was America’s intelligence so catastrophically wrong? In this dramatic and explosive book, award-winning Los Angeles Times reporter Bob Drogin delivers a narrative that takes us to Europe, the Middle East, and deep inside the CIA to find the truth—the truth about the lies and self-deception that led us into a military and political nightmare.

“Just when you thought the WMD debacle couldn’t get worse, here comes veteran Los Angeles Times national-security correspondent Drogin’s look at just who got the stories going in the first place. . . . Simultaneously sobering and infuriating—essential reading for those who follow the headlines.”—Kirkus Reviews

“In this engrossing account, Los Angeles Times correspondent Drogin paints an intimate and revealing portrait of the workings and dysfunctions of the intelligence community.”—Publishers Weekly

“An insightful and compelling account of one crucial component of the war's origins . . . Had Drogin merely pieced together Curveball's story, it alone would have made for a thrilling book. But he provides something more: a frightening glimpse at how easily we could make the same mistakes again. . . . The real value of Drogin's book is its meticulous demonstration that bureaucratic imperative often leads to self-delusion.”—Washington Monthly

“Drogin delivers a startling account of this fateful intelligence snafu.”—Booklist

Curveball: Spies, Lies, and the Con Man Who Caused a War