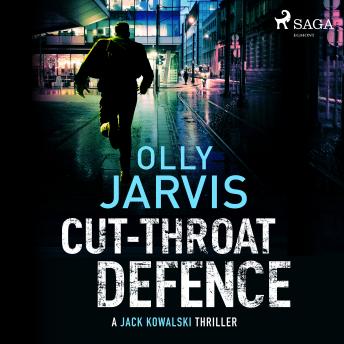 There is no man richer than a man without a price...

Jack Kowalski is a young and newly qualified barrister, who finds himself working on the biggest drugs importation trial ever played out on English soil. With the assistance of his equally inexperienced instructing solicitor, Lara Panassai, Jack argues a savage 'cut-throat' defence - a risky tactic where the defendants blame each other - and quickly embroils some of the most eminent QCs in the land.

As the son of Polish immigrants, the sensitive Kowalski has always found it hard to fit in, with a sense of inferiority and constant nervousness in Court. Now he must face his demons and fight not only for his clients but for his very future at the Bar.

But when the defendant then unexpectedly absconds, Jack and Lara must fight on regardless, following a tip that leads them out of the courtroom and into Manchester's seedy underworld - crime bosses, strip clubs, corrupt lawyers and all manner of hidden sins.

As the case grows darker with each new discovery, who in this viper pit of deception can Jack and Lara trust?

'The tautly-written, tense thriller weaves together the fates of crime victims, gangsters, cops and lawyers - often culminating in a realistic courtroom drama.' - Manchester Evening News.
'A legal thriller in the great Grisham tradition - genius author!' - Gyles Brandreth.
'The violence in the criminal underworld of Manchester is presented in scenes which are short and shocking. Cut-Throat Defence is an excellent read.' - Simon Brett, author and CWA Golden Dagger winner.

-
Olly Jarvis is a writer and criminal defence barrister, originally from London but now working in Manchester. Drawing on his experiences, he writes both fiction and non-fiction with a particular understanding of the pressures and excitement of life in the courtroom. He wrote the highly acclaimed Radio 4 drama Judgement, and wrote and presented the BBC documentary Mum Knows Best. He is also the author of Death by Dangerous. Olly has two children and lives in Cheshire.