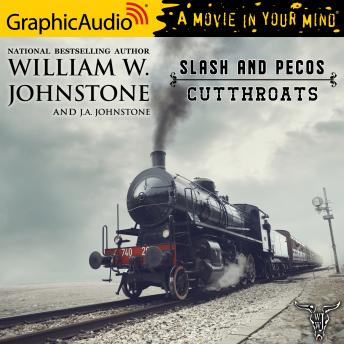 #1 of Slash and Pecos (Dramatized Adaptation)

Not every Western hero wears a white hat or a tin star. Most of them are just fighting to survive. Some of them can be liars, cheaters, and thieves. And then there's a couple of old-time robbers named Slash and Pecos... After a lifetime of robbing banks and holding up trains, Jimmy "Slash" Braddock and Melvin "Pecos Kid" Baker are ready to call it quits-though not completely by choice. Sold out by their old gang, Slash and Pecos have to bust out of jail and pull one last job to finance their early retirement... The target is a rancher's payroll train. Catch is: the train is carrying a Gatling gun and twenty deputy US marshals who know they're coming. Caught and quickly sentenced to hang, their old enemy-the wheelchair-bound, bucket of mean, Marshal L.C. Bledsoe-shows up at the last minute to spare their lives. For a price. He'll let them live if they hunt down their old gang, the Snake River Marauders. And kill those prairie rats-with extreme prejudice... Performed by Michael John Casey, Zeke Alton, James Konicek, Colleen Delany, Marni Penning, Drew Kopas, Scott McCormick, Matthew Schleigh, Steven Carpenter, Alejandro Ruiz, Eric Messner, Nora Achrati, Keith Richards, David Zitney, Henry Kramer, Shayna Small, Bradley Smith.