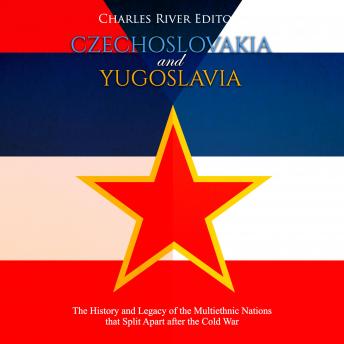 Czechoslovakia and Yugoslavia: The History and Legacy of the Multiethnic Nations that Split Apart after the Cold War

On New Year's Day 1993, Czechoslovakia broke into two separate countries, the Czech Republic and Slovakia. Thus ended one of the creations brought about by the Treaty of Versailles after World War I, and as a country that had existed for just under 75 years, Czechoslovakia spent most of its time under the tyranny of fascism or communism.
Of course, the country's origins go back far longer than the 1910s, and they were complex and convoluted. The very geography of central Europe meant this territory had been conquered and occupied many times over the course of history, and for much of the modern era, the area belonged to much larger empires, including the Holy Roman Empire, the Austrian Habsburg Empire, and finally the Austro-Hungarian Empire. Nevertheless, two distinct ethnicities had come to make up the bulk of the territory's inhabitants: the Czechs, predominantly in the areas of Bohemia and Moravia, and the Slovaks, in Slovakia. Both peoples had their own Slavic-based languages, but the languages were similar enough to be mutually intelligible.
Despite any ethnic similarities, the country that formed in 1918 among the ashes of the Austro-Hungarian Empire was by no means a "nation-state" as most people understand that term. In fact, much of the territory which bordered Germany was inhabited by ethnic German speakers, including one of Prague's most famous sons, the writer Franz Kafka. One of the 20th century's most celebrated authors spoke German as his first language. As such, the lands that became Czechoslovakia had usually existed in some kind of supranational system where identity was allowed to be relatively fluid.
Czechoslovakia's split was mostly peaceful, which stands in stark contrast to that of Yugoslavia, arguably one of the most unusual geopolitical creations of the 20th century. The Yugoslav state had never existed in any historical sense, and the ties that bound together its constituent peoples were tenuous at best. Although nominally all "Slavs," the country was an amalgamation of languages, alphabets, cultures, religions and traditions, which ensured its short existence was littered with splits, conflicts, and shocking violence. In a sense, it's somewhat surprising that it lasted as long as it did.
The Kingdom of Yugoslavia was particularly vulnerable to the forces that engulfed the rest of Europe at the end of the 1930s, including fascism and communism. When the Axis forces attacked in 1941, the country quickly capitulated and was dismembered by the Nazis and their allies. A separate Croatian state was formed, led by Ante Paveli?, who committed some of the worst crimes and human rights abuses of the war. The Balkan region was virtually emptied of its Jewish population, victims of the Nazi Holocaust.
Internal issues plagued the country in its final years and Tito had tinkered with Yugoslavia's constitution on several occasions. His final attempt, in 1974, saw the partial separation of Kosovo - crucial in the Serb national story - from the rest of Serbia. A number of reasons led to the rising Serb nationalist sentiment after Tito's death, but Kosovo was a central aspect. Yugoslavia required far-sighted, magnanimous leaders to avoid internecine disputes, but none were available, or at least in positions of power in the 1980s. In Croatia, Franjo Tudjman - a long time Croat nationalist - emerged as the republic's leader, and Slobodan Miloevi? rose to prominence in the middle of the decade and, despite apparently being a career communist, positioned himself as "defender of the Serbs." He began ousting his rivals and installing sympathetic underlings into leadership positions in Kosovo, Vojvodina, and Montenegro, essentially giving him a majority bloc at the federal level.

Czechoslovakia and Yugoslavia: The History and Legacy of the Multiethnic Nations that Split Apart after the Cold War