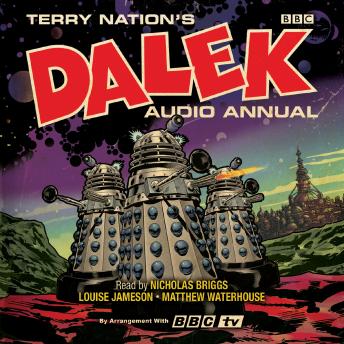 The Dalek Audio Annual: Dalek Stories from the Doctor Who universe

The Daleks rampage in this collection of vintage stories from Terry Nation’s Dalek Annuals of the 1970s.

'Exciting sci-fi adventures in their own right...beautifully pitched sound design...this is a great piece of work from BBC Audio.' Doctor Who Magazine 'If you’re a Dalek fan of any description, then you need to get hold of this. Before the Daleks arrive…' scifibulletin.com

Urgent message to all Anti-Dalek Force agents: the Daleks are coming! Defend yourself with The Dalek Audio Annual, packed with exciting tales of galactic terror, global invasion and the adventures of plucky human resistance fighters.

Order your copy now. It is your duty to remain informed of progress in the ongoing battle between humans and Daleks!

Dalek Audio Annual: Dalek Stories from the Doctor Who universe