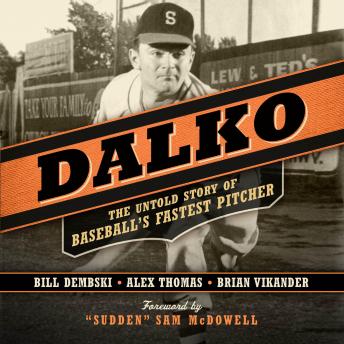 Gripping and tragic, Dalko is the definitive story of Steve “White Lightning” Dalkowski, baseball’s fastest pitcher ever. Dalko explores one man’s unmatched talent on the mound and the forces that kept ultimate greatness always just beyond his reach.

For the first time, Dalko: The Untold Story of Baseball’s Fastest Pitcher unites all of the eyewitness accounts from the coaches, analysts, teammates, and professionals who witnessed the game’s fastest pitcher in action. In doing so, it puts readers on the fields and at the plate to hear the buzzing fastball of a pitcher fighting to achieve his major league ambitions.

Just three days after his high school graduation in 1957, Steve Dalkowski signed into the Baltimore Orioles system. Poised for greatness, he might have risen to be one of the stars in the Baseball Hall of Fame. Instead, he spent his entire career toiling away in the minor leagues. An inspiration for the character Nuke LaLoosh in the classic baseball film Bull Durham, Dalko’s life and story were as fast and wild as the pitches he threw.

The late Orioles manager Earl Weaver, who saw baseball greats Nolan Ryan and Sandy Koufax pitch, said “Dalko threw harder than all of ‘em.” Cal Ripken Sr., Dalkowski’s catcher for several years, said the same. Bull Durham screenwriter Ron Shelton, who played with Dalkowski in the minor leagues, said “They called him “Dalko” and guys liked to hang with him and women wanted to take care of him and if he walked in a room in those days he was probably drunk.” This force on the field that could break chicken wire backstops and wooden fences with his heat but racked up almost as many walks as strikeouts in his career, spent years of drinking all night and showing up on the field the next day, just in time to show his wild heat again.