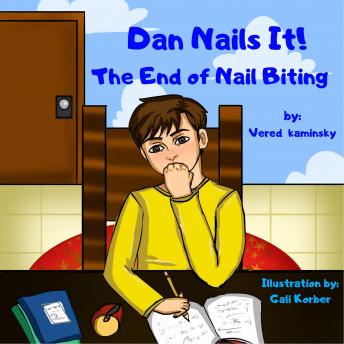 Dan Nails It! The End of Nail Biting

'Dan had been biting his nails for as long as he could remember. It began at night time with his mother saying goodnight to him and turning off the light; he felt alone in his big, dark room. As he grew older and he felt a little nervous or agitated, like at the beginning of the school year, his nails would always make their way into his mouth. In the beginning, Dan's thumbnail was his favorite to chew. However, once he was finished chewing that nail and there was nothing left of it, he would move onto the rest of his fingernails. Slowly but surely, he would bite another fingernail, or even two. By the time he was 10-years old, every single fingernail of his had been completely bitten off.

One day Dan realized that his habit was a vicious circle that he was not able to break. He did not want to bite his nails, yet it provided him with comfort and soothed him. Feeling disappointed and discouraged with himself, he turned to his mother for help....'

'...Dan's mother knew that the first step to helping Dan break his habit was for him to really want it himself. 'First, in order for you to stop biting your fingernails, you have to really, really want to break the habit, and then we can start to build a plan. When you really, truly want to, let me know!' she told Dan, walking away. Dan said, 'I have made up my mind. I want to get rid of this bad habit of mine. I want to. I really want to!' And so together, Dan and his mother decided on a special plan to help Dan break his nail-biting habit. Dan's mother suggested, 'We will divide the next two weeks into a plan of action, just as if you were training for a running competition. The first step is for you to define what your goal is and write it down.'

'Ok, well my goal is simple. I want to stop biting my fingernails,' Dan explained his mother, and she grinned. Seeing her grin, Dan added, 'Ok, well maybe it’s not so simple, but I can do it... but I can do it.'

Dan Nails It! The End of Nail Biting

This title is due for release on June 21, 2020
We'll send you an email as soon as it is available!