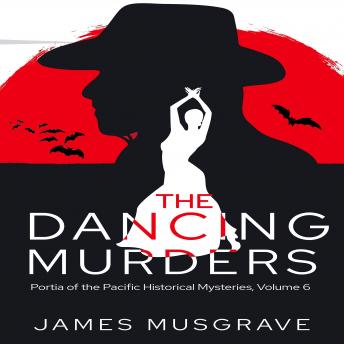 The Dancing Murders is the latest iteration in a series of mysteries and murders that revolve around the amazing and redoubtable Clara Shortridge Foltz. As one of the very first women attorneys and private detectives seeking to perform in a man's arena, Clara always has her back to the wall but her deductive skills and her uncanny intuition have seen some label her as the real-life incarnation of the fictional Sherlock Holmes. Author James Musgrave uses a literary contrivance of telling essentially the same story from four different perspectives,that of the principal suspects. This is a technique fraught with danger that risks the reader becoming overwhelmed with the repetitive nature of the facts; however, Musgrave handles it extraordinarily well, with strong characters whose interesting, and at times, unusual perspectives of the same event prevent the reader from wearying of its retelling. The plot is as twisty and convoluted as any I have read lately and sucks the reader into the narrative so completely that they will constantly find themselves questioning the motives and actions of the various characters. You genuinely will want to read this story from cover to cover because it just won't let you go.

'The Dancing Murders is a trove of secrets, but author James Musgrave's own secret is his gift for capturing the psyches of larger than life historical figures including gunslinger Wyatt Earp and his Jewish common-law wife, notorious madam Ida Bailey, and pioneering female attorney Clara Shortridge Foltz. From the heights of Jewish mysticism to the seedy underbelly of nineteenth century San Diego, The Dancing Murders is California's answer to Rashomon and As I Lay Dying. In Musgrave's nimble hands, the death of Rabbi Sonenschein becomes a window into the life of a West Coast as fascinating as it is forgotten.'--Jacob M. Appel, author of Einstein's Beach House.

This title is due for release on June 5, 2021
We'll send you an email as soon as it is available!