Danger is Still Everywhere: Beware of the Dog (Danger is Everywhere book 2) 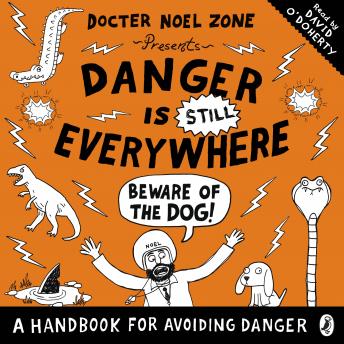 Will Docter Noel Zone's second book tell you how to combat a CROCUUM*? YES
And reveal the secrets of the world's greatest (and only) Dangerologist? THAT TOO.
Has he written it yet? NO
Is it because he's hiding in a wardrobe? MAYBE

Docter Noel is facing his most terrifying situation EVER - a little dog called Napkin has come to stay. That may not sound particularly dangerous, but every POD (Pupil of Dangerology) knows the only safe pet is a pet rock. So now Docter Noel is stuck in a wardrobe while Napkin wreaks havoc around the Dangerzone. And all the while Docter Noel is supposed to be writing his new VERY IMPORTANT handbook on Dangerology (Level 2).

That is until the Pet of the Year competition is announced and Docter Noel hatches a plan to impress his neighbor Gretel. There's only one problem. Serial safety-flouter Max WURST is the judge. . .

For Docter Noel, it's never been clearer that DANGER IS STILL EVERYWHERE
*A crocodile that looks like a vacuum cleaner that lives under the stairs.

Danger is Still Everywhere: Beware of the Dog (Danger is Everywhere book 2)