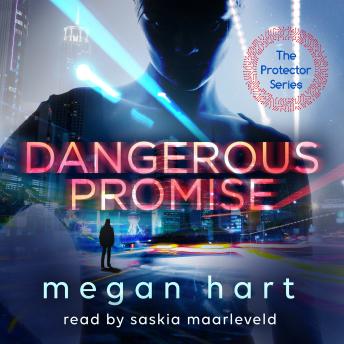 'Narrator Saskia Maarleveld brings to life a futuristic romance that doesn't have to leave the solar system to embrace its sci-fi roots...she flawlessly navigates between action-packed scenes and those of quiet intimacy.' - AudioFile Magazine

A female bodyguard with enhanced abilities. A billionaire playboy committed to destroying people like her. A romance they didn't expect...
Nina Bronson used to be all human -- until the experimental surgeries and internal technology that saved her life and enhanced her as a soldier also forced her to leave the army for private service. Now she and her peers are facing slow, painful deaths unless their technology is upgraded, and the one man keeping those upgrades illegal and unavailable is an obnoxious billionaire. A man too gorgeous for his own good.
A man she's supposed to guard with her life.
Ewan Donahue is the public voice speaking out against the enhancement procedures of injured soldiers. But when his lobbying leads to death threats, he needs someone to protect him around the clock. He doesn't want to rely on an enhanced soldier-Nina's tech goes against everything he stands for. But he really doesn't want her to be beautiful like she is. Doesn't want her to suffer like she will.
Doesn't want to succumb to the searing desire he feels for her.
As a series of attacks on his life send them to a remote cabin, their close proximity brings them together in ways they never imagined. They know they must prevent the need simmering between them, resist each other at all costs. But when tensions are high and danger is close, passion burns hottest of all...