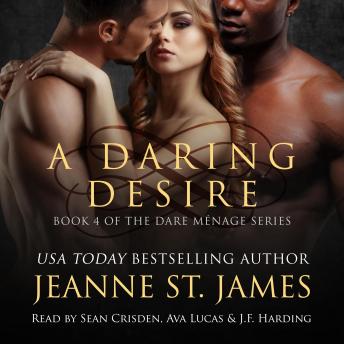 Gryff Ward made a serious mistake when he hired the hot-as-hell defense attorney Rayne Jordan as an associate in his high-profile legal firm, even though she’s one of the best. Now he’s struggling to keep it professional, especially when she insists on calling him “Boss.”

Rayne’s been attracted to the firm's top attorney ever since her interview. And she’s well aware that calling the conservative man “Boss” drives him crazy…in a very good way.

Add Trey Holloway, their newest client, a troubled NFL quarterback, into the mix. Tension arises when it’s clear that both Gryff and Trey want Rayne and Gryff is willing to fight for her. However, Trey doesn’t hide the fact that he wants Gryff too.

Now Gryff’s having a hard time fighting not only his attraction to Rayne but to another man. Even though he stubbornly refuses to admit his deepest, darkest desires.

Then Rayne takes control. She’s determined to have them both in not only her bed but her life, and she won’t give up until she does.

Note: This book in the series can be read as standalone. It includes an HEA ending. It is intended for audiences over 18 years of age since it includes MMF scenes between all three characters.