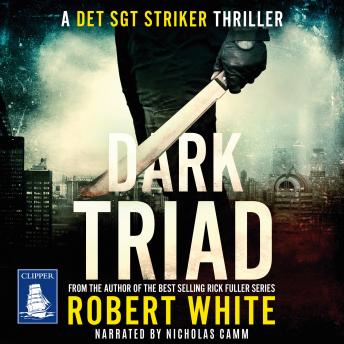 What drives someone to murder? Anger? Greed? Jealousy? Revenge?

When nineteen year old Charlene Major is brutally slain in broad daylight, Detective Sergeant Ewan Striker fears a connection to a spate of animal thefts to the north of the City. He knows that some unscrupulous thieves steal pets for bait. But not this time. Striker believes this thief steals to torture and kill. And that can only mean one thing. If this shocking murder is indeed an escalation from animal to human, this man kills for one reason only. Pleasure.

Dark Triad is the third novel in the Detective Sergeant Striker series from one of the new breed of British crime authors, Robert White. Striker is an uncompromising figure who heads a team of specialist officers in Lancashire's Serial Crimes Unit. Dark Triad twists and turns from the very beginning, bursting with tension and drama as the team struggle to catch a vicious killer that will no doubt strike again.