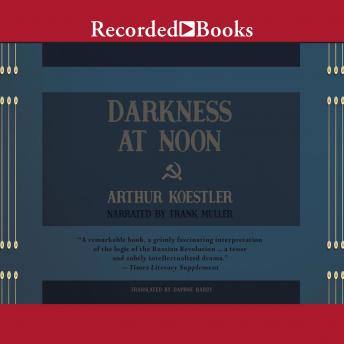 A fictional portrayal of an aging revolutionary, this novel is a powerful commentary on the nightmare politics of the troubled 20th century. Born in Hungary in 1905, a defector from the Communist Party in 1938, and then arrested in both Spain and France for his political views, Arthur Koestler writes from a wealth of personal experience. Imprisoned by the political party to which he has dedicated his life, Nicolas Rubashov paces his prison cell, examining his life and remembering his tempestuous career. As the old intelligentsia is eradicated to make way for the new, he is psychologically tortured and forced to confess to preposterous crimes. Comparing himself to Moses, led to the Promised Land but refused entry, he sees only darkness at the end of his life where once he saw such promise for humanity. Frank Muller's narrative expertise is perfect for this haunting work. Rubashov's personal agony becomes Muller's as he presents Koestler's relevant and important questions to a world entering a new millennium.