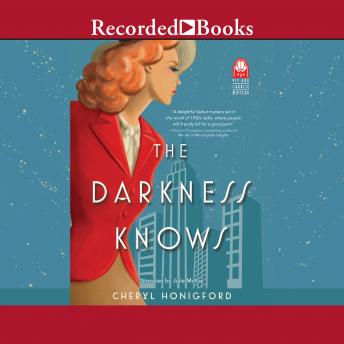 #1 of Viv and Charlie Mysteries

Bright lights. Big city. Brutal murder. Chicago, 1938. Late one night before the ten o'clock show, the body of a prominent radio actress is found dead in the station's lounge. All the evidence points to murder.and one young, up-and-coming radio actress, Vivian Witchell, as the next victim. But Viv isn't the type to leave her fate in the hands of others-she's used to stealing the show. Alongside charming private detective Charlie Haverman, Vivian is thrust into a world of clues and motives, suspects and secrets. And with so much on the line, Viv finds her detective work doesn't end when the 'On-Air' lights go out. The gripping first novel in a new series from debut author Cheryl Honigford, The Darkness Knows is a thrilling mystery that evokes the drama and scandal of radio stardom in prewar Chicago.