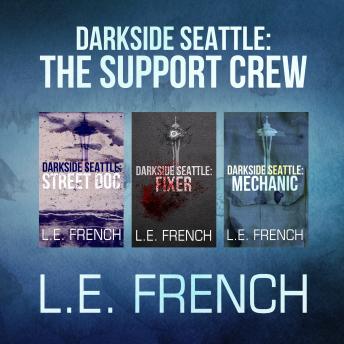 Decency, humanity, and humility don't live on the Darkside. Seattle's underbelly in a darker, grimmer future plays host to a collection of novellas, each exploring how people wind up in that forsaken hellhole-and what they're willing to do to prove they belong.
Street Doc
On the run for a crime he committed, Hideo has only the shirt on his back and memories of a beautiful wife, a great job, and an exclusive view from his bedroom. The once-respected surgeon has to learn to live on the streets of Darkside Seattle-a place no one sane wants to go and no one stuck there can leave.
Hideo's skills can keep others alive, but he's never dodged bullets before. The future looks grim.
Fixer
Victoria Godhand, the unflinching chief negotiator for her father's megacorp, wants a lot of things. Respect tops the list.
Ross Lynch, her father's handpicked successor and the company's COO, also wants a lot of things. Victoria tops the list.
If she can't have what she wants, neither can he. Victoria would rather rot in jail-and it may come to that.
Mechanic
Isabella Acosta has lived in the barrio half of the Darkside her entire life-no cops, no laws, no way out.
Respected for surviving so long, Isabella keeps her head down and doesn't make waves-until someone puts a gun to her nephew's head, that is. Now, she'll do anything to protect the boy she helped her brother raise-anything.