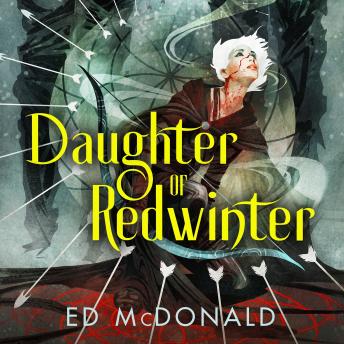 Those who see the dead soon join them.

From the author of the critically acclaimed Blackwing trilogy comes Ed McDonald's Daughter of Redwinter, the first of a brilliant fantasy series about how one choice can change a universe.

Raine can see—and speak—to the dead, a gift that comes with a death sentence. All her life she has hidden, lied, and run to save her skin, and she’s made some spectacularly bad choices along the way.

But it is a rare act of kindness—rescuing an injured woman in the snow—that becomes the most dangerous decision Raine has ever made. Dangerous because the woman is fleeing from Redwinter, the fortress-monastery of the Draoihn, warrior magicians who answer to no king, and who will stop at nothing to reclaim what she’s stolen. A battle, a betrayal, and a horrific revelation force Raine to enter the citadel and live among the Draoihn. She soon finds that her secret ability could be the key to saving an entire nation.

Though she might have to die to make it happen . . .

This title is due for release on June 28, 2022
We'll send you an email as soon as it is available!