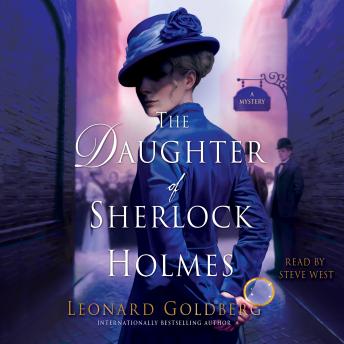 The Daughter of Sherlock Holmes: A Mystery

From USA Today and internationally bestselling author Leonard Goldberg comes The Daughter of Sherlock Holmes, a new thrilling tale of the great detective's daughter and her companion Dr. John Watson, Jr. as they investigate a murder at the highest levels of British society.
1914. Joanna Blalock's keen mind and incredible insight lead her to become a highly-skilled nurse, one of the few professions that allow her to use her finely-tuned brain. But when she and her ten-year-old son witness a man fall to his death, apparently by suicide, they are visited by the elderly Dr. John Watson and his charming, handsome son, Dr. John Watson Jr. Impressed by her forensic skills, they invite her to become the third member of their investigative team.
Caught up in a Holmesian mystery that spans from hidden treasure to the Second Afghan War of 1878-1880, Joanna and her companions must devise an ingenious plan to catch a murderer in the act while dodging familiar culprits, Scotland Yard, and members of the British aristocracy. Unbeknownst to her, Joanna harbors a mystery of her own. The product of a one-time assignation between the now dead Sherlock Holmes and Irene Adler, the only woman to ever outwit the famous detective, Joanna has unwittingly inherited her parents' deductive genius.

Daughter of Sherlock Holmes: A Mystery