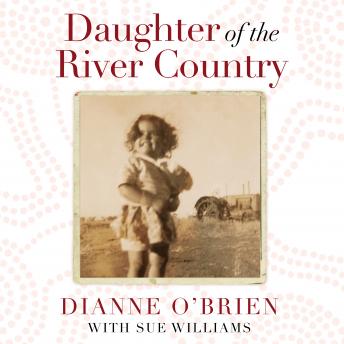 Daughter of the River Country: A heartbreaking redemptive memoir by one of Australia's stolen Aboriginal generation

A heartbreaking, redemptive memoir of raw power, Daughter of the River Country is the story of an extraordinary journey from a childhood as one of Australia's Stolen Generation to Aboriginal Elder

Born in rural Australia in the 1940s, baby Dianne is immediately taken from her parents and placed with a white family. Raised in an era of widespread racism, she grows up believing her Irish adoptive mother is her birth mother.

When her adoptive mother tragically dies and she is abandoned by her adoptive father, Dianne is raped, sent to the brutal Parramatta Girls Home and forced to marry her rapist in order to keep her baby. After suffering years of domestic abuse, but refusing to let her spirit be broken, Diane finally discovers she is a Yorta Yorta woman, a daughter of the river country, and is reunited with her birth mother. She learns that her great-grandfather was a famous Aboriginal activist and from here she becomes a powerful leader in her own right, vowing to help others in any way she can.

Daughter of the River Country explores for the first time the devastation caused to Australia's Aboriginal Stolen Generation, who were forcibly placed with white families as part of a government assimilation programme.

'A compelling memoir about the power of love and staying the course.' LINDA BURNEY, the first Aboriginal Member of Australia's House of Representatives

Daughter of the River Country: A heartbreaking redemptive memoir by one of Australia's stolen Aboriginal generation

This title is due for release on July 2, 2021
We'll send you an email as soon as it is available!