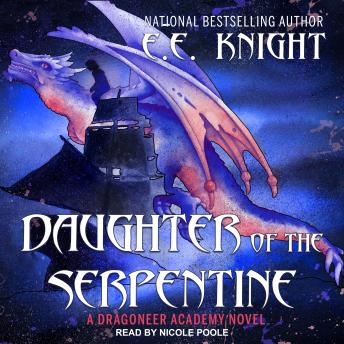 Daughter of the Serpentine

As a young dragoneer moves through the ranks of the prestigious Serpentine Academy, her challenges grow greater and her time grows short to draw out a series of deadly threats, in this thrilling coming-of-age fantasy novel.

Sixteen-year-old Ileth is now an Apprentice Dragoneer, with all of the benefits and pitfalls that her elevation in rank entails. But her advancement becomes less certain after she's attacked by an unknown enemy, and Ileth begins to suspect that someone deadly may be hiding within the walls of the academy.

Outside of the walls there is a different challenge. The Rari Pirates are strangling the Vale Republic. What they lack in dragon firepower, they make up for in the brutality of their ever-expanding raids, making hostages or slaves of the Republic's citizens. Surrounded by enemies, Ileth will need to learn what kind of dragoneer she wants to be. And as she makes decisions about her future, Ileth will have the chance to uncover the secrets of her past. Both will irrevocably change the course of her life.