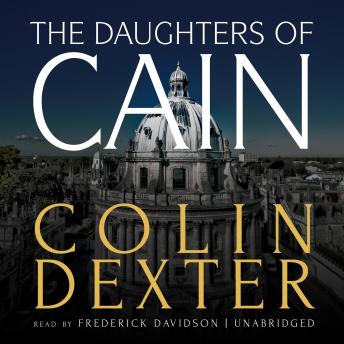 The Daughters of Cain

Little progress had been made by the Thames Valley Police since the discovery of a corpse in a North Oxford flat. The police had no weapon, no suspect, and no motive. But within days of taking over the investigation, Chief Inspector Morse and Detective Sergeant Lewis uncover startling new information about the life and death of the victim, Dr. Felix McClure, late of Wolsey College, Oxford.
The trail leads to a staircase in Wolsey College and a former "scout" there, one Edward Brooks, who disappears following the theft of a knife from the Pitt Rivers Museum. When another body is discovered, Morse suddenly finds himself with too many suspects, including Brooks' wife, a prostitute, and an enigmatic schoolmistress. Attracted to one of the possible killers, the chief inspector may be too involved for success.
It will take much thought, many pints, and not a little anguish before Morse sees the connection between McClure's death and the daughters of Cain.