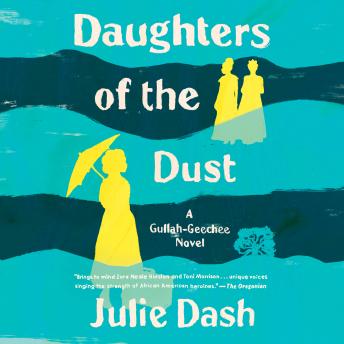 Daughters of the Dust: A Gullah-Geechee Novel

Drawing from the magical world of her iconic Sundance award-winning film, Julie Dash’s stand-alone novel tells another rich, historical tale of the Gullah-Geechee people: a multigenerational story about a Brooklyn College anthropology student who finds an unexpected homecoming when she heads to the South Carolina Sea Islands to study her ancestors.

Set in the 1920s in the Sea Islands off the Carolina coast where the Gullah-Geechee people have preserved much of their African heritage and language, Daughters of the Dust chronicles the lives of the Peazants, a large, proud family who trace their origins to the Ibo, who were enslaved and brought to the islands more than one hundred years earlier.

Native New Yorker and anthropology student Amelia Peazant has always known about her grandmother and mother’s homeland of Dawtuh Island, though she’s never understood why her family remains there, cut off from modern society. But when an opportunity arises for Amelia to head to the island to study her ancestry for her thesis, she is surprised by what she discovers. From her multigenerational clan she gathers colorful stories, learning about 'the first man and woman,' the slaves who walked across the water back home to Africa, the ways men and women need each other, and the intermingling of African and Native American cultures. The more she learns, the more Amelia comes to treasure her family and their traditions, discovering an especially strong kinship with her fiercely independent cousin, Elizabeth. Eyes opened to an entirely new world, Amelia must decide what’s next for her and find her role in the powerful legacy of her people.

Daughters of the Dust is a vivid novel that blends folktales, history, and anthropology to tell a powerful and emotional story of homecoming, the reclamation of cultural heritage, and the enduring bonds of family.

Daughters of the Dust: A Gullah-Geechee Novel