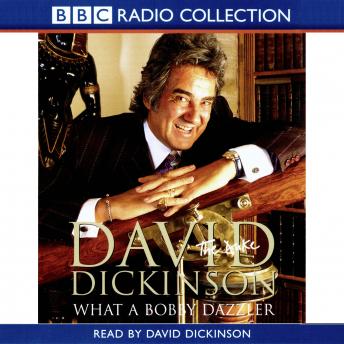 David Dickinson The Duke - What A Bobby Dazzler

David Dickinson is a household name, the king of the catchphrase, undisputed darling of daytime TV and a rising star. He's a respected antiques expert and exudes a taste for the finer things in life. But the road to his success has not been as smooth as his patter and he's learnt a lot at the school of hard knocks. David was first introduced to showbiz when he travelled the world as the manager of his international cabaret star wife, Lorne. After building himself a reputation as an antiques dealer to the rich and famous with an eye for treasures, a chance meeting with a TV exec at a barbecue began David's journey to primetime TV on Bargain Hunt, and in his autobiography David shares some of his experiences of sudden celebrity and reveals many of the highs and lows which have coloured his life so far.

David Dickinson The Duke - What A Bobby Dazzler