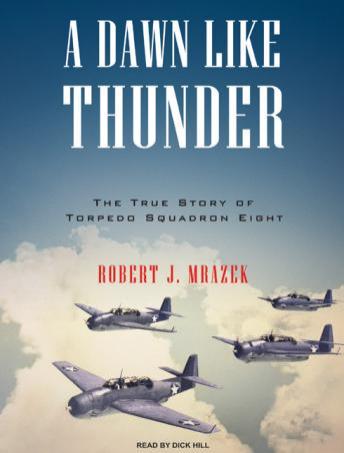 A Dawn Like Thunder: The True Story of Torpedo Squadron Eight

One of the great untold stories of World War II finally comes to light in this thrilling account of the members of Torpedo Squadron Eight and their heroic efforts in helping an outmatched U.S. fleet win critical victories at Midway and Guadalcanal. These thirty-five American men-many flying outmoded aircraft-changed the course of history, going on to become the war's most decorated naval air squadron, while suffering the heaviest losses in U.S. naval aviation history.

Robert J. Mrazek paints moving portraits of the men in the squadron and exposes a shocking cover-up that cost many lives. Filled with thrilling scenes of battle, betrayal, and sacrifice, A Dawn Like Thunder is destined to become a classic in the literature of World War II.

Dawn Like Thunder: The True Story of Torpedo Squadron Eight

This title is due for release on December 8, 2008
We'll send you an email as soon as it is available!