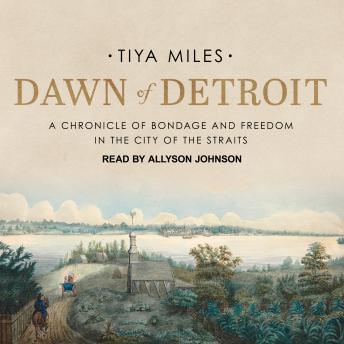 Dawn of Detroit: A Chronicle of Bondage and Freedom in the City of the Straits

Most Americans believe that slavery was a creature of the South, and that Northern states and territories provided stops on the Underground Railroad for fugitive slaves on their way to Canada. In this paradigm-shifting book, celebrated historian Tiya Miles reveals that slavery was at the heart of the Midwest's iconic city: Detroit.

In this richly researched and eye-opening book, Miles has pieced together the experience of the unfree-both native and African American-in the frontier outpost of Detroit, a place wildly remote yet at the center of national and international conflict. Skillfully assembling fragments of a distant historical record, Miles introduces new historical figures and unearths struggles that remained hidden from view until now. The result is fascinating history, little explored and eloquently told, of the limits of freedom in early America, one that adds new layers of complexity to the story of a place that exerts a strong fascination in the media and among public intellectuals, artists, and activists.

A book that opens the door on a completely hidden past, The Dawn of Detroit is a powerful and elegantly written history, one that completely changes our understanding of slavery's American legacy.

Dawn of Detroit: A Chronicle of Bondage and Freedom in the City of the Straits