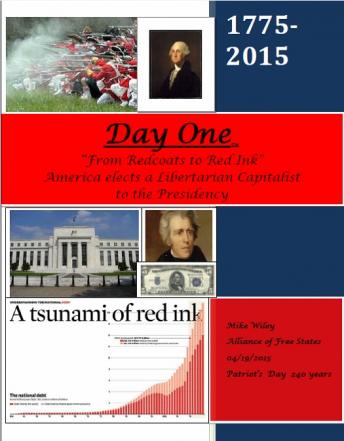 Day One - From Redcoats to Red Ink

Former Libertarian/Conservative Radio Talk Show Host Mike Wiley, whose 1994 US Senate victory was just one woman away from completion, when Hillary Rodham Clinton at the last moment decided to come down and help little brother out, even though she and Bill Clinton stayed away from the campaign for most of the year due in part to the polled massacre he would face against incumbent Republican Senator Connie Mack. However the Father of the Freedom Rally that led to the defeat of major gun control legislation was polled to defeat the Republican Connie Mack. However it was in the better interests of Hillary Rodham Clinton that the Conservative Democrat Wiley not win. Now 21 years later Wiley returns to challenge Hillary Rodham Clinton as the Libertarian candidate and defeats her and Jeb Bush to win the Presidency. This book reviews the historical aspects of the Intent of the Founding Fathers which both major parties have ignored for over 102 years. With that the LIbertarian Wiley presnets the perfect coalition of "We the People" to defeat the two "Elitist" candidates and presents his first Day in office and how dramatic and easy the return to the Republic and Lawful Government can be, when someone has the guts and determination to enforce the laws on the books, not the ones the Progressive Marxists Democrats keep hidden in their closet.

Day One - From Redcoats to Red Ink

This title is due for release on April 19, 2015
We'll send you an email as soon as it is available!