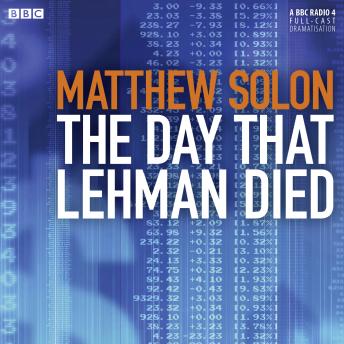 The Day That Lehman Died

A BBC World Play written by Matthew Solon and directed by John Dryden. On 15 September 2008, Lehman Brothers, one of the oldest and largest investment banks in the world, with its headquarters in New York, filed for Chapter 11 bankruptcy protection. It was the largest bankruptcy filed in US history and sent the already unstable global financial markets into an uncontrollable tailspin. Based on insider interviews, this 60-minute BBC Radio drama is a fictionalised reconstruction of what happened in one weekend. Starring John Shea, John Rothman, Rob Campbell and Mark La Mara. Winner of the Peabody Award, the Wincott Award for Programme of the Year and silver-winner in The Sony Awards' Drama Award. A Goldhawk Essential Production recorded on location in New York.