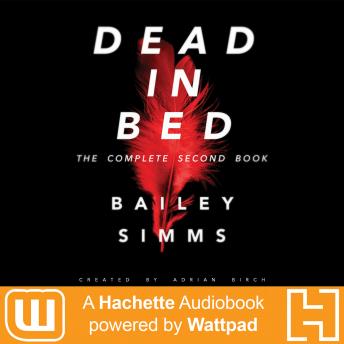 Dead in Bed is a new release from Hachette Audiobooks: Powered by Wattpad -- an innovative collaboration between Hachette Book Group, a leading publisher, and Wattpad, a passionate storytelling community of over 45 million people. Your favorite online stories, now available in your headphones!

Dead in Bed follows Ashley Young after a sexually-transmitted plague breaks out in her small town. When the plague begins leaving its victims with a bizarrely amplified libido, Ashley has to be willing to do anything-no matter how difficult or morally questionable-in order to survive.

Meanwhile, a meta-narrative follows Bailey Simms, teen author of Dead in Bed, while she's stuck writing at home with a rare medical condition. As Bailey's book grows in popularity, and her fans start to clamor for the sequel, she learns that being a successful author may come with a terrifyingly dangerous price.